An Act of general application having been the legal basis of Québec Law from 1866 till 1993. Governing all civil law matters, it was amended in 1969 by the Act respecting the co-ownership of immoveables in order to introduce the legal regime of divided co-ownership. The Civil code of Lower Canada has been replaced, on January 1, 1994, by the Civil code of Québec. 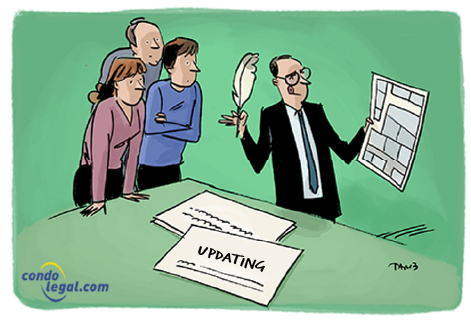 The interpretation of a declaration of co-ownership during a general meeting of the co-owners is sometimes problematic. If, moreover, it has been published before the coming into force of the Civil Code of Québec, in 1994, things can get dicey. In order to avoid potential conflicts between co-owners, caused by  an outdated declaration of co-ownership, it is essential to have it rewritten, if it has been published before January 1, 1994. A professional with experience in co-ownership law is qualified to do so. It is better to invest in rewriting your declaration of co-ownership, rather than getting tangled in costly litigation, the result of which is sometime uncertain.
View more
Updating declaration of co-ownership (Offer of services)
Co-ownership law underwent significant changes in 2018, 2019 and 2020. The adoption of Bills 141 and 16 significantly amended the Civil Code of Quebec with respect to divided co-ownership. The first allowed several amendments on insurance and co-ownership, while the second subjected the syndicates of co-owners to certain additional obligations, including those of keeping a maintenance book of the building and obtaining a study of the contingency fund establishing the sums necessary for this fund to be sufficient to pay for major repairs and the replacement of the common portions.
View more
By continuing your navigation, you accept the use of cookies to have services and offers tailored to your interests. To learn more, click here.'