A natural person or a legal person who contracts directly with a third party, to sell to the latter a building he has built, has caused to be built or has undertaken to build. Insofar as divided co-ownership is concerned, it is a person who, when the declaration of co-ownership is registered, owns at least half of all the  fractions and, in certain cases, includes his successors and assigns.

WARNING ! Under the “Loi sur le bâtiment” (the Building Act), a developer is presumed to be a general contractor since he offers for sale or for exchange a building or a work of civil engineering. Thus, he must hold a license issued by the “Régie du bâtiment du Québec” (the Quebec construction Board). Question: The syndicate's board of directors made the decision to cut down a tree at the entrance of the property. It was a very old apple tree. It was unpleasant for many people to know that we were constantly walking in the debris of cheekbones that fell on the ground, on the sidewalk or in the parking lot. Finally these apples ended up making a fermentation (very unpleasant smell). Now a co-owner is reproaching for not having voted on this decision at the meeting of co-owners. Is he right?
Login / Register to read this article
Le promoteur refuse de terminer les travaux 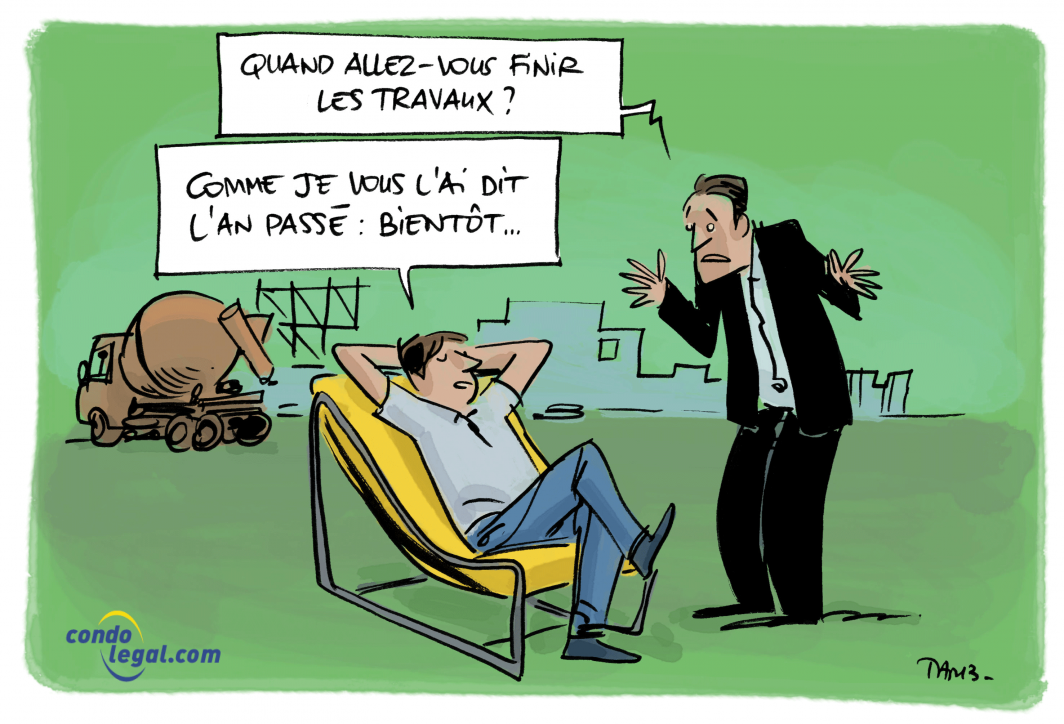 Every syndicate of co-owners has obligations regarding common portions maintenance. Article 1039 of the Civil Code of Québec provides that the object of the syndicate is the conservation of the immovable, the maintenance and the administration of the common portions. However, this section was amended following the adoption of Bill 16. At the end of the first paragraph, referring to the syndicate of co-ownership, it reads the following sentence: "The legal person must, in particular, see to it that the work necessary for the preservation and maintenance of the immovable is carried out." This duty to preserve the immovable is exercised in particular by the setting up of a maintenance logbook.
View more
Interim director

The presence of a Board of Directors is mandatory in a co-ownership. It is the executive body of the syndicate and its legal representative. Its members act as the mandataries of the syndicate. When a co-ownership is newly constituted, the declaration of co-ownership generally provides for the appointment of a interim director, who exercises the functions of the Board of Directors until the Meeting of co-owners appoints a new board of directors. Consequently, the obligations related to administration, listed below, apply to this director.  Its appointment Usually, it is the developer who designates him, in accordance with a provision in the declaration of co-ownership (By-laws of the Immovable). Often he appoints one of his  representatives to act as the interim director of the syndicate.
View more
End of the transitional administration

Expenses related to the maintenance and administration of the common portions of a co-ownerships start from its constitution as a legal person. It is therefore necessary that each co-ownership sets up, upon publication of the declaration of co-ownership, a Board of Directors to administer it. To ensure the star up of the syndicate, the developer usually designates in the declaration of co-ownership (by-laws of the immovable), one of its representatives to act as the interim director of the syndicate.
View more
Droit d'annulation du contrat préliminaire Les promoteurs immobiliers qui ne sont pas les titulaires de la licence appropriée pour la construction de la Régie du Bâtiment du Québec peuvent avoir une existence légale, être inscrits dans les pages jaunes et faire de la publicité dans les journaux ou sur le Web. Or, avant de signer un contrat préliminaire pour l’achat d'un appartement dans une nouvelle construction, assurez-vous que le promoteur choisi soit accrédité par Garantie de construction résidentielle (GCR) et détenteur de la sous-catégorie d'une licence auprès de la Régie du bâtiment du Québec (RBQ), selon le type de bâtiments (maison ou condo) que vous voulez acquérir.
View more
Suspension and reduction of voting rights
The right to vote is recognized as an essential element of any modern society, and as such, co-owners cannot be deprived of it except as provided in the law. In addition, each co-owner has, in principle, at the meeting a number of votes proportional to the relative value of his fraction. However, in certain circumstances, it is provided that the co-owner may have his right to vote suspended or reduced, by the sole effect of the law. It is important to know who may be affected by these restrictions and what the consequences are.The voting rights of the co-owners of the immovable can, in certain circumstances, be suspended or reduced. It is important to know who may be affected by these restrictions and their consequences.
View more
By continuing your navigation, you accept the use of cookies to have services and offers tailored to your interests. To learn more, click here.'