WARNING! This type of majority should not be confused with a simple majority. 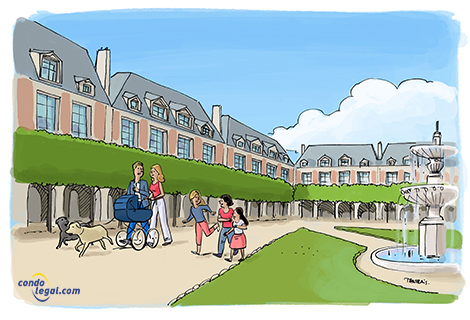 I am a co-owner in a co-ownership in phases of 10 syndicates of co-owners who share a grassy lot in common part. Until the arrival of young children in the condos the space was not very busy. Currently it is the regular meeting place for children and their parents (end of the day during the week and weekends depending on the temperature). The temporary installation of inflatable games and water games (stored after each use) attracts several children from the neighborhood and consequently increases the noise level. Many homeowners who live nearby complain about the noise and use of this space. In our declaration of co-ownership, it is mentioned that the tranquility of all co-owners must be respected.
Login / Register to read this article
How to deal with co-ownership non-voting

Irregularities noted at a meeting of co-owners do not make the decisions taken non-existent, but voidable. Consequently, the co-owner who intends to invoke the irregularity of a decision must initiate a legal proceeding, in accordance with article 1103 of the Civil Code of Quebec. Wishing to promote the stability of the decisions taken by the assembly, the legislature allows such a remedy to be brought only in certain circumstances. Thus, any co-owner may ask the court to annul or, exceptionally, modify a decision of the meeting of co-owners if it is partial, if it was taken with the intention of harming the co-owners or in disregard of their rights, or if an error occurred in the calculation of votes.
View more
Majorities required in Meeting of co-owners