Person who gives a mandate to another (the mandatary) to represent him in the performance of a legal act with a third party. A co-owner (the mandator) may grant to a mandatary the power to represent him at a general meeting of co-owners. This power and, if need be, the writing that records it, is called a proxy. The mandator may revoke the mandate he has granted at any time.

April 17, 2021 Any co-owner may delegate his right to vote to an mandatary. Thus, with the notice calling the meeting containing agenda, financial statements and budget, there is usually a blank proxy form. However, since there is no requirement for the board to include one, it may be necessary for a co-owner to prepare one himself. A formidable tool at assemblies and an object of covetousness for many when a decisive vote is planned in the co-ownership. However, proxies and their validity are often the subject of unfortunate questions and attempts to counter them. What about it?
View more
Insurance of the directors

The director plays a leading role in a co-ownership. As a mandatary of the syndicate of co-owners, he ensures the smooth running of the immovable’s day to day business, which implies a working knowledge of the tasks related to this key function. As such, directors must act with prudence, diligence, honesty and loyalty, and never lose sight of the co-owners community interests. The civil liability of the directors with regard to the tasks incumbent upon them is largely ignored. Thousands of Quebeckers who sit annually on a board of directors, maybe including yourself, are unaware of this state of affairs.
View more
Procurations: combien puis-je en détenir? 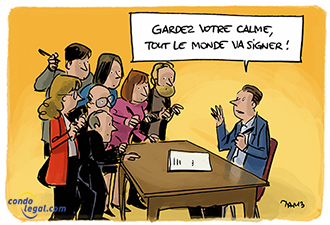