32134 Members
Ask your question without charge

Decision taken by the General Meeting of the co-owners following a proposal submitted to a vote. To be voted upon, a resolution must, in principle, be on the agenda in the form of a question. However the Law provides that if all co-owners convened to the meeting are present and they all consent to the addition of a question to the agenda, then it may be added and a vote then becomes possible.

Decisions taken by co-owners in a general meeting must be recorded and entered in the minutes. This document is essential for a co-ownership because it ensures the written preservation of the deliberations or consultation of the general meeting, as well as the result of each vote so that any co-owner and director can refer to it in due course. It also allows to ascertain that the general meeting was conducted in accordance with the rules. Given its importance, this document must respect a certain formalism.
View more
Meeting of the Co-owners

A General Meeting of the co-owners cannot take place without an agenda. To deliberate in accordance with the Law, co-owners should be able to become aware, before the General Meeting, of the questions on the agenda. This the reason why it should be annexed to the notice of call, usually prepared by the Board of Directors (Board). It contains all the questions to be tabled for deliberation during the General Meeting. This document must be clear and unambiguous to avoid legal challenges. An overview of the various specificities of the agenda.
View more
Documents to annex to the notice of meeting

With respect to the Annual General Meeting, the article 1087 of the Civil Code of Québec provides that certain documents must be attached to the notice of meeting.These documents are to be sent to co-owners so that they can ascertain the exact nature of the questions and issues to be discussed. Some of these documents, described in the agenda, are a prerequisite to the validity of the decision (such as, a draft amendment to the declaration of co-ownership ). Other documents are, on the other hand, necessary for the information of the co-owners (such as, the budget forecast and the report of the Board of Directors)
View more
Meeting of co-owners: what consequences for the absent co-owner? 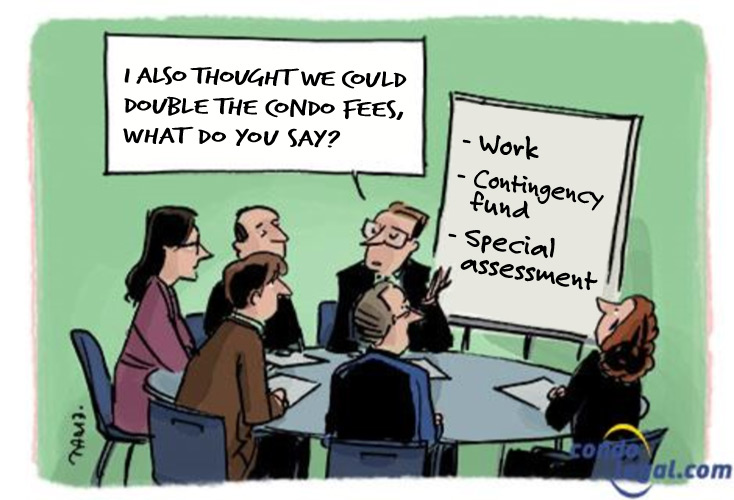 I was absent during the last meeting of co-owners. The directors are "all-rounders" and I don't see why I should listen to what they have to say. Moreover, as usual, they voted on completely absurd matters, such as sumptuous rehabilitation works for the entrance hall of the building. Question: Am I still obliged to submit to the decisions made there?
Login / Register to read this article
THE MAJORITIES REQUIRED IN GENERAL MEETINGS

The resolutions of the General Meeting of the co-owners require complex calculations in order to determine whether a the required majority has been reached. To do so, you must make sure that the register of co-owners is up to date, and that the compilation of votes is done according to the relative value specific to each fraction. This reduces the risk of contestation of an adopted resolution. That said, some decisions have extremely important consequences for all co-owners so the requirements in terms of majorities are then higher. For this reason, the law imposes three levels of majority: absolute, enhanced and double majority, depending on the importance of the decision to be taken.
View more
Meeting officers