34300 Members
Ask your question without charge

Amount of money collected from the buyer by a local municipality upon the transfer of an immovable, new or already existing, subject to exemptions provided by law. These transfer taxes, commonly known as the "taxe de Bienvenue", were introduced in 1976 by the Minister of Municipal Affairs, Guy Tardif. An "urban legend" falsely attributes the fatherhood of this tax to Liberal Minister Jean Bienvenue. 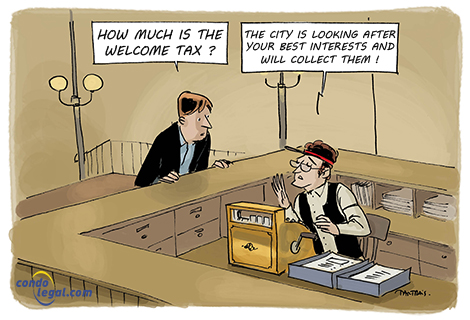 Transfer duties, commonly called “welcome tax” are an additional source of revenue for cities and municipalities. This tax requires you, as a new owner, to pay duties on the acquisition of real estate. It applies to transfers of any new or used building and land, unless exempted by Law. Any new purchaser has 30 days to pay his transfer duties, from the moment he receives the invoice asking him to pay them. Generally, this invoice is sent a few weeks after the acquisition of the apartment.
View more
By continuing your navigation, you accept the use of cookies to have services and offers tailored to your interests. To learn more, click here.'