Insect, which lives in numerous and organized colonies, black in color with sometimes a red spot on the thorax, depending on the species. Measuring between six and twelve millimeters, it is recognizable by its impressive size and robustness. Its presence in a building may reveal a problem with humidity or with the decomposition of wooden structures. It is attracted by damp and rotten wood to dig tunnels in which to build its nest. In the long term, the presence of carpenter ants can cause significant damage to the frame of a building.

Rodents and pest: a puzzle 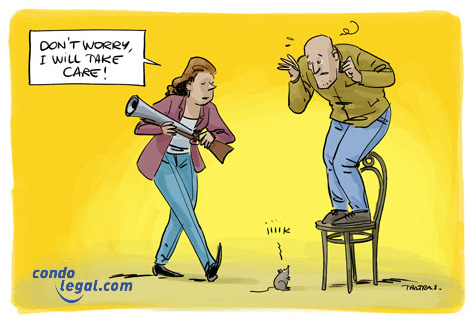 Parasitic disorders in co-ownership are well and truly present. They take the form of infestations of various insects, including cockroaches, carpenter ants and  Bed Bugs, not to mention  rats, mouse,and field mice, whose presence has a repugnant effect and possibly harmful to human health. These insects and animals intrude unexpectedly into an apartment, or even an entire co-ownership, and can make its occupants live a nightmare. Noise in the pipes and noise at night caused by rats and mice add to the equation. Most of the time, it is up to the syndicate of co-owners, with regard to its obligation to maintain the common portions and preserve the building, to mandate a company specialized in pest management in order to carry out a disinsection or a deratization, or both. If that is the case, three questions will need to be answered: who is to blame, who should act and who should bear the costs?
View more
By continuing your navigation, you accept the use of cookies to have services and offers tailored to your interests. To learn more, click here.'