The act of deciding something about a specific situation, after individual or collective deliberation.  Example: the decision of a board of directors.

Amendment to the minutes of a meeting of co-owners 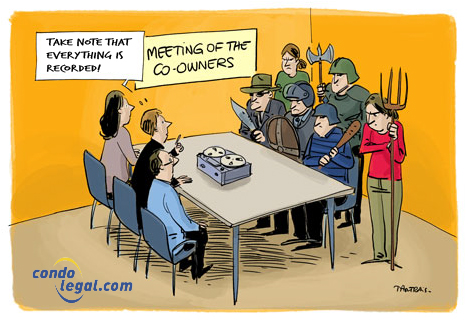 A co-owner (formerly president) wants to modify the minutes of the meeting of co-owners that took place two years in the screen. At our last meeting of co-owners, this minutes were adopted last year by all the co-owners present and represented at the time. Currently, three out of six co-owners are new, so were not present at this last meeting of co-owners. In the circumstances, I find it difficult to see how a vote can be credible. This same co-owner always wants to change or remove sentences from the minutes according to his personal opinion and whichdoes not correspond to reality. Question: Can we amend a minutes that were adopted 2 years ago?
Login / Register to read this article
Co-ownership for two: risks of blockages inherent in decision-making 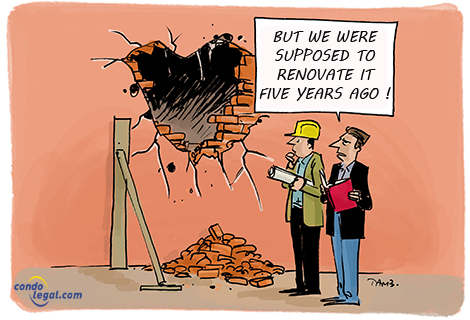 We are only two co-owners and directors. When I arrived a year ago, there was no management of the co-ownership, no assembly. I have held two meetings for a year and informed the other co-owner of the legislation in terms of co-ownership and the existence of the declaration of co-ownership, the latter having no notion on this subject. In addition, a year ago, I told him that his balcony needed to be repaired since it was flowing (rust) on my patio. Each co-owner must see to the maintenance of the balcony and patio. He mentioned to me that he was aware that it had been in this state for at least 4 years. I was afraid that the balcony would collapse this winter with the weight of the snow. We are the two signatories on the account. Therefore, I could not undertake the work on behalf of the syndicate. Questions: What can I do to require the work to be done quickly? Send him a formal notice ? I may no longer have his collaboration at all, which is already difficult.
Login / Register to read this article
Canceling a decision of the board of directors

Irregularities noted at a meeting of co-owners do not make the decisions taken non-existent, but voidable. Consequently, the co-owner who intends to invoke the irregularity of a decision must initiate a legal proceeding, in accordance with article 1103 of the Civil Code of Quebec. Wishing to promote the stability of the decisions taken by the assembly, the legislature allows such a remedy to be brought only in certain circumstances. Thus, any co-owner may ask the court to annul or, exceptionally, modify a decision of the meeting of co-owners if it is partial, if it was taken with the intention of harming the co-owners or in disregard of their rights, or if an error occurred in the calculation of votes.
View more
CONDUCT OF A MEETING OF THE BOARD OF DIRECTORS 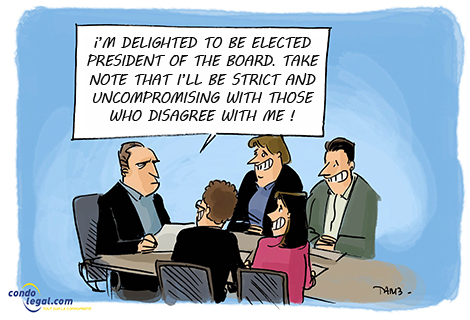 The board of directors occupies an important function in co-ownership governance. It holds meetings as often as the interest of the collectivity of co-owners require and addresses any matter that concerns the syndicate’s good management. These meetings are moderated by a president who ensures their efficient conduct. Directors can debate and reflect upon the orientations to give to their co-ownership. The more carefully and methodically the meetings are prepared, the more motivated and interested the members will be to participate thereto. Moreover, precise rules must be followed imperatively, otherwise the decisions taken could be invalidated.
View more
Minutes of the meetings of the board of directors 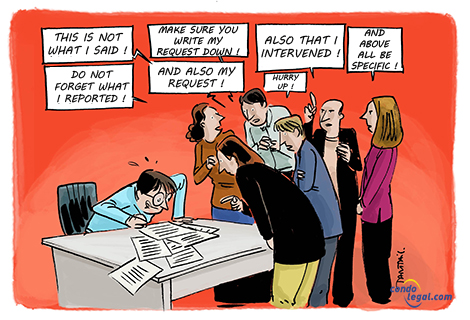 Decisions taken by directors must be recorded and recorded in the minutes. This document is essential for a co-ownership, because it ensures the written preservation of the deliberations of the board of directors, as well as that of  the result of each vote, so that any co-owner and director can refer to it over time. It also shows that the meeting of the board of directors was held properly. As such, it must be as detailed and clear as possible, without repeating everything that was said at the meeting. Personal assessments and quotations should not appear in the minutes of the Board of Directors. In view of its importance, this document must respect a certain formalism.
View more
By continuing your navigation, you accept the use of cookies to have services and offers tailored to your interests. To learn more, click here.'