Government register identifying all immovables and listing the real estate transactions related to these buildings that are thus made public (e.g., deed of gift, deed of sale, deed of mortgage loan, indivision agreement, declaration of co-ownership, legal hypothec of the syndicate of co-owners, deed of servitude,  etc.). The Civil Code of Quebec provides for the keeping of a single land register for the entire territory of Québec. It consists of as many land books as there are registration divisions. Each land register consists of different registers including, in particular, the index of immovables which includes as many immovable records as there are immovables registered on the cadastral plan relating to the registration division.

How to organize a meeting of co-owners smoothly
December 27, 2021- The Meeting of co-owners is a major event in the life of a co-ownership. A meeting at least once a year, it is decisive since it allows the making of major decisions that impact the lives and finances of the co-owners. The board of directors' mission is to take care of the convening and holding of the meeting of co-owners but also of the execution of the decisions it votes. Decisions taken have to appear clear and careful planning is required. It is also important to understand the rules that apply to it.
View more
Collection of unpaid common expenses

The failure to pay general or special common expenses (condo fees) is one of the most contentious co-ownership’s issues. It is the duty of the board of directors of the syndicate of co-owners to collect them, unless this task has been delegated to the condo manager. When a co-owner's contributions have been in arrears for more than three months, the law provides, ex officio, that he automatically loses his right to vote at the general meetings of the co-owners. He is also exposed to legal recourses, so that the syndicate can recover the amounts owing. A review of the options in such cases.
View more
The creation of a divided co-ownership

Whether you are a real estate developer (for a new building) or several owners of an existing building who wish to convert it, the rules for subjecting a building to divided co-ownership are the same. The creation of a divided co-ownership is necessary when an immovable must be divided into lots composed of a private portion and a share  of the common portions, and which belong to one or more different persons. The community of co-owners acquires the status of legal person from the day a declaration of co-ownership is published at the Land registry office (Land Register). The legal person thus constituted takes the name of “syndicate of co-owners”. Its mission is to ensure the " preservation of the immovable, the maintenance and administration of the common portions, the protection of the rights appurtenant to the immovable or the co-ownership, as well as all business in the common interest ". To form this co-ownership several steps involving many protagonists are necessary.
View more
Notary 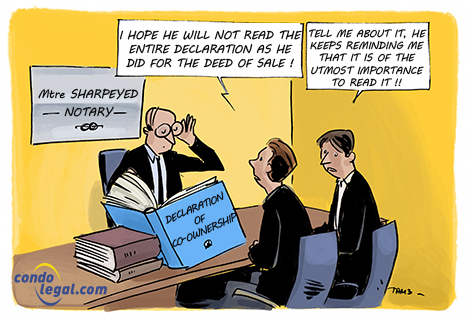 The notary is a jurist with the task of public officer, who ascertains the free and informed consent of the parties. The notary also has the role of legal adviser. It therefore protects consent. The intervention of the notary is very important when purchasing an apartment in a divided co-ownership. A professional, he is a member of the “Chambre des notaires du Québec” (Québec Chamber of Notaries). In this capacity, the notary's mission  is to receive, on behalf of his clients, the acts to which the parties must or want to have given the character of authenticity (such as  a declaration of co-ownership). Even though it is preferable that he should get involved at the outset of a transaction, this legal adviser usually gets involved  after the signing of the offer to purchase or of the preliminary contract.
View more
What is a syndicate of co-owners?

The syndicate acts as a legal person bringing together all the co-owners of the building and not each of them individually. The Civil Code of Quebec (C.c.Q.) provides that the syndicate of co-owners arises, by operation of law, at the time of publication of the declaration of co-ownership in the Land register. With the powers devolved to it by law and exercised by its two decision-making bodies, it thus expresses the autonomy of the community of co-owners. As a result, the co-owners are third parties to the syndicate. The assets of the syndicate are thus distinct from those of each co-owner. Despite the collective nature of this type of co-ownership, the legislator has not attributed to the syndicate the ownership of the common portions, which is distributed among the co-owners according to the relative value of their fraction.
View more
By continuing your navigation, you accept the use of cookies to have services and offers tailored to your interests. To learn more, click here.'