In the same way as any other natural or legal person, a syndicate of co-owners is likely to incur civil liability towards third parties, including co-owners. Responsibility is the counterpart of power: where authority is, there is responsibility. This responsibility can be translated into the financial contribution of the co-owners, since in the event of a judgment condemning the syndicate to pay a sum of money, this judgement will be enforceable against him and each of the persons who were co-owners at the time the cause of action arose, proportionately to the relative value of his fraction. Therefore the law obliges any syndicate of co-owners to take out insurance covering its civil liability towards third parties.

The object of the coverage

This insurance is crucial to the protection of the co-ownership and of the individual co-owners. It covers the collectivity of co-owners – against third parties claims – including any claim by the co-owners or occupants of the immovable.

The insurance subscribed by the syndicate covers the risks associated with the common portions of the immovable (such as: the inadequate snow removal of a sidewalk or slippery stairs) or damage caused by its employees (such as: the janitor or manager) in the performance of their duties. It protects the syndicate if it is held responsible for having caused a prejudice to a third party, including property damage or bodily injury.  As it is the case with any insurance policy, be aware of exclusions.

In addition to the usual exclusions, this type of civil liability insurance generally excludes any damages resulting from insufficient coverage in the policy of the syndicate such as an insufficiency resulting from a declared value inferior to the reconstruction cost of the building. If the syndicate has to rebuild, in totality or partially, each co-owner will have to contribute its own funds to cover the difference between the indemnity paid by the insurer and the reconstruction cost.

Failure to insure the civil liability of the syndicate

The failure to subscribe civil liability insurance coverage can have serious consequences for the syndicate, the co-owners individually and the members of the Board of Directors.

Any director is personally liable if he does not act with care and diligence in the execution of its mandate. The failure of the syndicate to subscribe civil liability insurance can render the members of the Board of Directors personally liable.

WHAT YOU SHOULD KNOW! Under the provisions of the civil liability insurance policy, the insurer can be compelled, under certain conditions, to pay the legal fees and court costs incurred in the defense of the syndicate if a civil liability lawsuit is instigated against it.

WHAT TO KEEP IN MIND: In all cases, the Board of Directors should retain the services of a competent insurance professional. The latter will be able to recommend an amount of coverage commensurate with the insured risks. 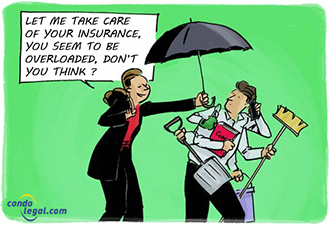 The liability of the syndicate