Your co-ownership is not immune to fraud. It may be defrauded by directors, co-owners, condo managers, service providers and third parties. Therefore, it is in your best interest to be wary of the behavior of potential suspects. You should not indulge in a witch hunt, however, some warning signs should arouse suspicion and command vigilance.

More often than not, co-ownership fraud is the result of accounting or financial manipulations. These are sometimes perpetrated by a director. The latter could help himself from the syndicate’s bank account, or engage in other malicious activities, such as falsification of signatures, or deposits in his bank account co-owners’ condo fees. It could also result from the manager depositing co-ownership’s funds in the bank account of another syndicate. In worst case scenarios, the funds end up in the management company‘s accounts. In doing so the offending manager comingles his client’s funds with his own.

Service providers may also commit fraud by padding their invoices. Such schemes are generally intended to pay an undue advantage to a director or to the manager. In addition, to renovate his unit, a co-owner may file an insurance claim for a loss he purposely caused. Some of them will even aggravate the extent of the loss, thereby increasing the scope of the work.

The warning signs of potential co-ownership fraud are well documented. The culprits, a director or the manager could, in particular:

Prevention is the key to avoid co-ownership fraud. There are simple steps to avoid fraud, insofar as it is possible. At the very least, you should consult the civil and criminal court records of an applicant manager or director. Available at the court offices or online, they will reveal his / her judicial track record, if any, as well as the reasons therefor.

Checking the candidate’s credit rating, and consulting the media is also judicious, as it is a useful source of information to unmask crooks, who may have made headlines.

Unlike other jurisdictions, Quebec still does not have a law that protects co-ownership funds, so that fraudulent individuals in their mist may cause considerable financial harm. Most of the time, when a syndicate discovers the misdeed, the culprits have disappeared without a trace or are insolvent. Defrauded co-owners may never see their money again.

The Quebec Order of Chartered Administrators

A manager who has access to a syndicate’s bank account as a signatory, or who manages co-ownership’s funds from his own bank account, should be a member of the Ordre des administrateurs agréés du Québec (Ordre des ADMA). All its members are subject to a code of ethics, must carry professional liability insurance and operate from a trust account. This will greatly limit the syndicate’s risk of being a fraud victim.

The Order of ADMA has set up an indemnity fund, providing compensation to legal or natural persons, as well as to any other third party victimized by one of its members. This occurs, for example, when a malicious person uses funds for another purpose than that originally intended.

WHAT YOU SHOULD KNOW!​ The Civil Code of Québec does not make financial guarantees a condition of holding the office of director. However, it sanctions fraudsters. The court may, at the request of any interested person, prohibit the exercise of the function of director of a syndicate of co-owners to any person found guilty of a criminal offence involving fraud or dishonesty, in a matter related to legal persons.

WHAT TO KEEP IN MIND: Co-ownership managers do not always offer the appropriate guarantees in term of financial soundness and competence. This is why they should all carry professional liability insurance covering their civil liability to avoid the potentially harmful consequences of their wrongdoing.

WARNING!  Co-ownership fraud is not a figment of the imagination, but a reality that no one can ignore. Every syndicate of co-owners can be a victim. In the recent past, unscrupulous condo managers have literally depleted the bank accounts of their customers, who never saw it coming. 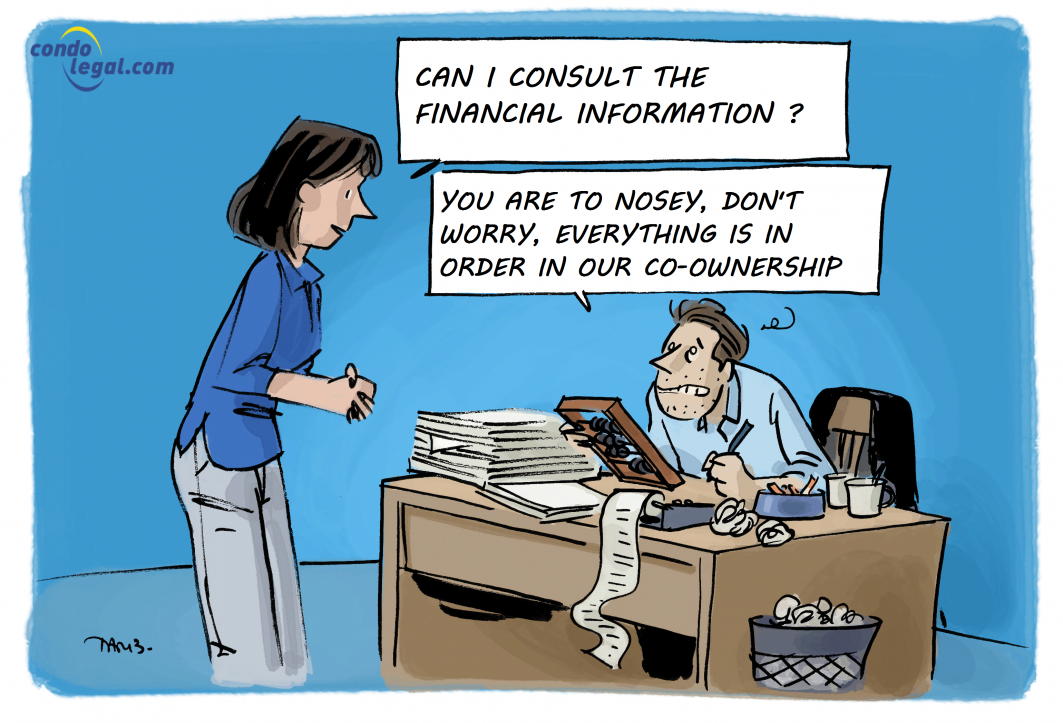