The manager bound to a syndicate by a contract for services does not have the same relationship with his client as the one who has the status of a salaried employee, at the end of a contract of employment. That being said, regardless of the nature of the relationship between the parties, it is advisable to specify the contract’s terms and conditions, including its obligations and its possible renewal. This will prevent misunderstandings and possible litigation.

Terminating the contractual relationship between the manager and the syndicate of co-owners requires, at all times, an evaluation of the legal and contractual parameters. A review of the various scenarios illustrating the expiration or resiliation of a contract for services.

TERMINATION AT THE EXPIRY OF THE TERM

In contract for services with a fixed or determinate term, expiry occurs at a given date, or concurrently with a foreseeable event, such as the termination of the co-ownership. Thus, the contractual relationship between the Manager and the Syndicate ends on a given date.

CONTRACT TERMINATION AT THE REQUEST OF THE SYNDICATE

The syndicate may, if it can justify of a serious reason, unilaterally resiliate the contract for services signed with the manager. This could occur if the latter has seriously breached his contractual obligations. Thus, the contract may be resiliated if, after sending the manager a formal default notice, the latter does not remedy the breach.

The law also allows the syndicate to unilaterally resiliate the contract for services, at any time, without having to prove the manager has committed any fault whatsoever. This right may be exercised even if the provision of service is already in progress, provided the said right is exercised in good faith and reasonably. Otherwise, the syndicate may have to pay damages.

This being said, the right to terminate without cause is not absolute. It could be limited by the provisions of the management contract, by virtue of a clause stipulating, for example, that it can only be terminated (once in force) after a certain number of months. For such a clause to be valid, the clause must be expressly and unequivocally stated. In short, the waiver of the right to terminate the contract without cause must be clearly stated in the contract, and be accepted knowingly by the syndicate.

CONTRACT TERMINATION AT THE REQUEST OF THE MANAGER

The co-ownership manager may unilaterally resiliate the management contract, i.e. without the authorization of the syndicate, only if he can invoke serious grounds, such as the:

In addition, even if the manager has legitimate reasons for terminating the management contract, it cannot exercise this right at an inopportune moment or in an untimely manner, that is, at a time that could be detrimental to the syndicate. For example, a manager cannot resiliate the contract on the eve of a general meeting of co-owners. Failure to comply with this requirement may result in an obligation to repair damages caused to its client by the unilateral termination of the contract.

The termination of the management contract has financial consequences for the syndicate. In such occurrences, the latter must, pay the amounts owing to the manager on the resiliation date:

However, insofar as these losses are concerned, the Manager will not be compensated for the profits he would have earned until the end of the contract, if the syndicate terminates it before its expiry. However, the Manager may claim amounts required to be paid to its employees as severance, provided that it proves that he could not have affected them to other tasks. It must be understood that the manager must, at all times, minimize his financial losses.

PAYMENT OF A FIXED AMOUNT INDEMNITY

In addition to the aforementioned method of compensation, a manager may include in the management contract a clause providing for the payment of a penalty in the event of a unilateral termination. The purpose of this type of clause is to provide preset damages, partly as compensation for the loss of profits that would have been earned. For example, it could be a sum equivalent to three months of management fees. In such cases, it is essential that the parties indicate, clearly and unequivocally, their intention not to invoke article 2129 of the Civil Code of Québec. Otherwise, it is likely that the courts would invalidate this type of clause.

WHAT YOU SHOULD KNOW!​​ The death or the incapacity of the condo manager does not terminate the contract for services unless it has been concluded taking into account the personal qualities of the manager, or unless the contract cannot be adequately assumed by his successor. In both cases, the syndicate could resiliate the contract.

WHAT TO KEEP IN MIND: If the contract is resiliated, the manager must remit the advances received from the syndicate, if they exceed what he has earned. As for the syndicate, it will have to pay the fees or expenses incurred for unpaid services rendered until the date of resiliation.

WARNING!​ The syndicate must act in good faith toward the manager. It cannot unilaterally terminate the management contract with the intention of causing harm. If it did so, he would be exposed to a claim for damages.

Back to sub-factsheet: Termination of the manager's contract 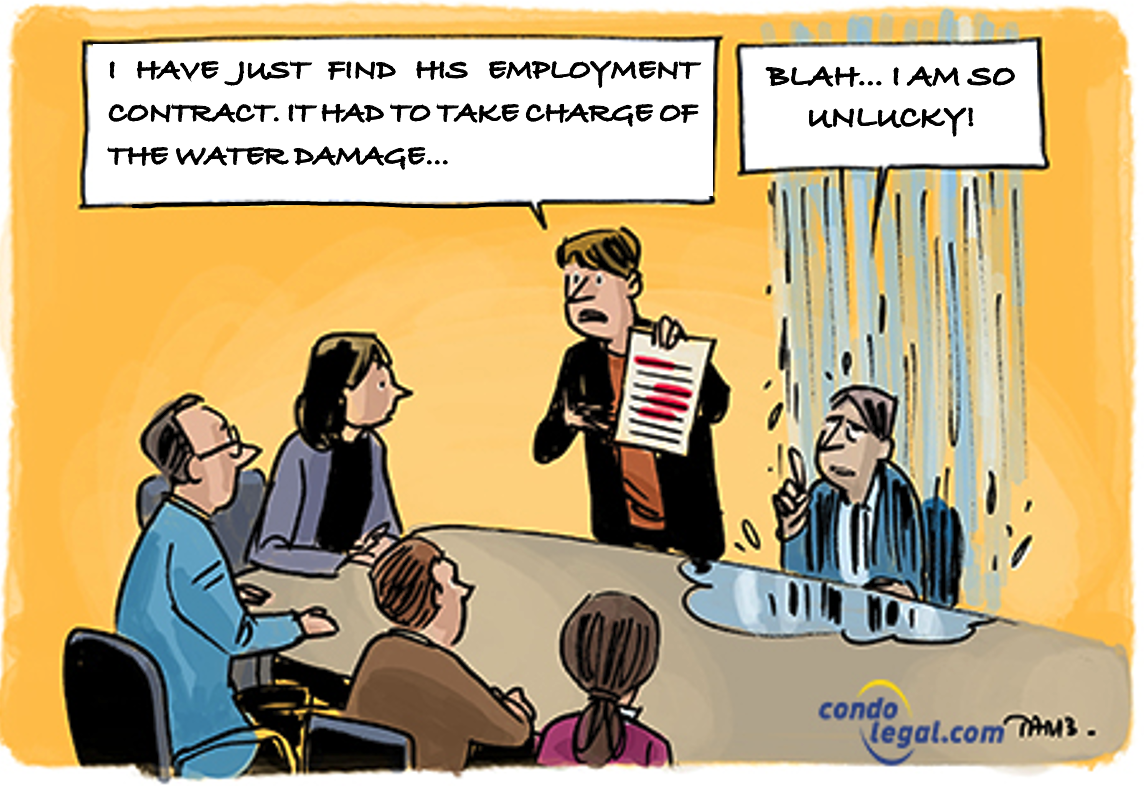