30845 Members
Ask your question without charge 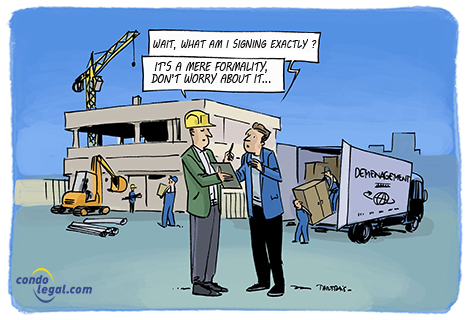 You may wish to occupy your apartment before signing the deed of sale. In order to do so, you will be asked to sign a interim occupancy agreement with your developer.

A co-ownership has no legal existence until the registration of its declaration of co-ownership in the Quebec Land Register. However before it can be registered, the cadastral plan must be officialized. Until then, you cannot take possession of your apartment, unless you sign an  interim occupancy agreement.

This scenario often occurs in the case of a residential tower: to proceed with the cadastral operation (subdivision) of a high-rise, one must wait until the major components are sufficiently achieved. The land surveyor is only then able to proceed to the actual measurements of the common and private portions (projected), from the established physical markers. This exercise is carried out for the purpose of the immatriculation of the private and common portions. Immatriculation consists in placing each lot on a cadastral plan, and indicating their boundaries, measurements and volume, and giving them a specific number. In order to carry out a cadastral operation, a request for a subdivision must be presented to the “Ministère de l’Énergie et des Ressources naturelles”.

If you decide to enter into an interim occupancy agreement, it should at least provide for:

If, at the expiry of the interim occupancy agreement, the deed of sale is not signed, the promisor-buyer must undertake to remit the vacant possession of the premises in their original state, at its own cost (if applicable). Also, the developer must undertake to take over the possession of the premises as they are at that time, with or without financial compensation.

The interim occupancy agreement can be signed without any monetary consideration. However, if an amount is requested, it should not exceed the monthly amount the purchaser would have paid if he had been   the registered owner of the unit. The calculations generally take into account the amount of both municipal and school taxes, a proportional share of the maintenance and management costs of the immovable, along with an amount equivalent to the interests calculated on the sale’s price.

Furthermore, the interim occupancy agreement may include any other conditions of occupation or financial provisions. It is therefore in the best interest of the parties to spell out precisely their respective obligations to avoid any misunderstanding.

Generally, interim occupancy agreements are drafted to protect the interest of the developer. Consequently, in the case of default to any one of the obligations in the agreement, for any reason, the developer could take advantage of the situation and impose its will to the promisor-buyer. For example, it could:

WHAT YOU SHOULD KNOW! Between the signing of the interim occupancy agreement and the signing of the deed of sale (before the notary), avoid carrying out any improvements ,for the obvious  reason is that if the sale does not go through, you are at risk of losing your investment, because the developer may have reasons to  refuse to reimburse you.

WHAT TO KEEP IN MIND: During the period of interim occupancy, the insurance of the developer does not cover your personal belongings and civil liability. You should subscribe sufficient multi-risk insurance during this period.

WARNING! You should not sign an interim occupancy agreement in haste, because you could end up paying large additional amounts. It is highly recommended to seek independent advice before making a commitment. Finally, do not pay any amounts higher than the maximum amounts payable under the Guaranty plan (if any) for the protection of your deposits. 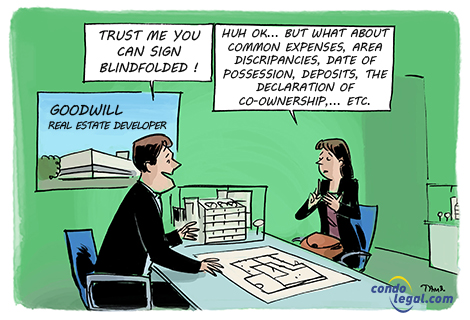 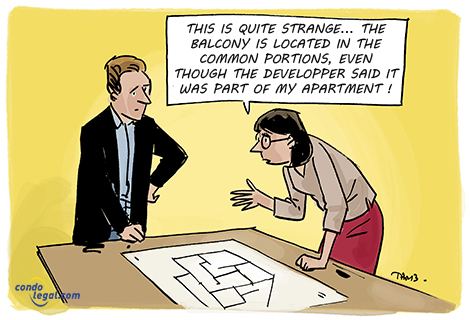