Disclosure obligations of the seller and the real estate broker

A recent judgment of the Court of Québec, Small Claims Division, sanctioned a company and one of its directors, who also acted as real estate broker, for not allowing buyers to adequately understand an important aspect of the property sold.

The building, built in 1938, had undergone major renovations for a four-unit co-ownership conversion. According to the company's administrator, the flat roof of the building still had a useful lifetime of nearly 7 years. However, no studies were carried out on its condition and the characteristics of the building prevented buyers from verifying it. In addition, the vendors had no documentation regarding the last roof repairs.

Water infiltrations were observed in 2017 from the roof, causing cracks in the ceiling of one of the units. After denouncing the situation, repairs and summary work were carried out by the syndicate, which sought compensation for hidden defects, as allowed by section 1081 of the Civil Code of Quebec, with the permission of the co-owners, in particular because of the unduly optimistic representations of the sales representative.

The judge recalled that a seller assumes an obligation of loyalty to the purchaser. It must not mislead him, by creating a false sense of security. False statements about the condition of the property relieve the purchaser of its obligation to further its inspection.

In this case, the administrator was wearing two hats but equated the situation with those where, as a broker, he is called upon to provide general commentary on the useful lifetime of the components of a building. However, the judge considered that he thus failed to take into account his particular status, the fact that he posed as the only person with a personal knowledge of the appearance of the roof, in addition to claiming competence on the subject.

In assessing his liability, the judge considers that his conduct must be compared to that of a normally prudent and diligent real estate broker, placed in the same circumstances. It is bound by an obligation to audit and advise. It must always be able to demonstrate the accuracy of the information it provides.

The court found that the real estate broker helped induce buyers to feel false security by making unduly optimistic statements about the lifetime of the roof that were not based on appropriate checks. This was negligent conduct on his part.

The two defendants have responsibilities that arise from different sources. The defendant should be considered primarily as a broker, while the company's responsibility is primarily due to the breach of the integrity of the purchasers' consent to the sales contracts. This opens up a responsibility known as "in solidum." 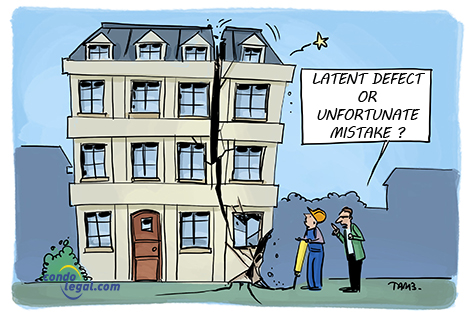 Latent defect: What appeals for the co-owner

Faulty design, latent and construction defects : What are the syndicate's recourses? 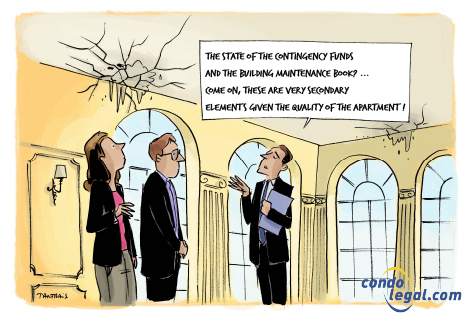 Declaration of the seller Deed of sale Real estate broker