30772 Members
Ask your question without charge

Construction « under the table » in co-ownership 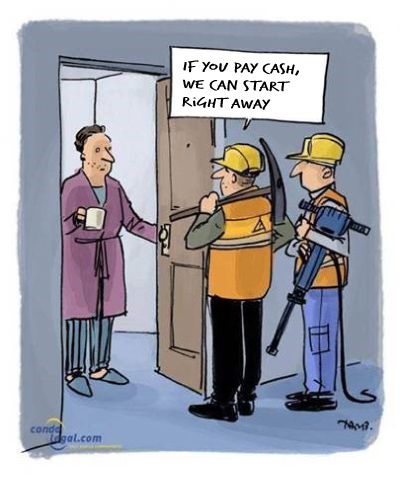 In compliance with its legal obligations to preserve the building, a syndicate of co-owners is frequently called upon to retain the services of contractors over the years to carry out, among other things, conversion work in the common portions. In this regard, the directors forming the board of directors of the syndicate have the obligation to act with prudence, honesty and loyalty and in the interest of the community of co-owners, in accordance with Article 322 of the Civil Code of Québec, when awarding a construction contract to one or more contractors.

With this in mind, can directors contract with a contractor who offers the syndicate a competitive price in return for a cash payment "under the table", i.e., without paying or remitting the taxes usually payable?

This question must be answered in the negative. It may seem advantageous to hire an under-the-table contractor to do work on the building, but "the truth is rarely pure and never simple," says author Oscar Wilde. The phenomenon of "moonlighting" in Quebec construction is not new. In 2015, the Régie du bâtiment du Québec launched an advertising campaign to encourage consumers to avoid hiring a contractor "under the table" and without a licence. Yet this scourge persists today.

The practice of "moonlighting" is not only a violation of the tax laws because of the absence of a bill and the payment of applicable taxes, it is also a negation of the obligations of the syndicate towards the community of co-owners. By agreeing to enter an under the table contract with a contractor, the syndicate and its directors may put their civil liability at stake.

The law regulates the liability of contractors and building professionals for any problem related to the quality of construction work. What happens when the work done by this contractor, who never submitted an invoice to the syndicate because he considered the contract to be under the table, proves to be defective, faulty or botched? The contractor could deny liability, or even claim purely and simply that there is no contract, written or verbal, with the syndicate.

It may be difficult for the syndicate to successfully pursue recourse against the contractor for deficiencies affecting its work. However, the syndicate is responsible for the preservation of the building and for damages caused to co-owners or third parties by the design or construction defect in accordance with Articles 1039 and 1077 of the Civil Code of Québec.

In these circumstances, the personal liability of the directors could also be engaged since they would have failed to observe the prudence, diligence, honesty and loyalty required in the performance of their duties by failing to retain the services of a contractor in due form.

Moreover, the courts, as custodians of the public interest, have repeatedly ruled that any contract involving under the table work may be declared absolutely null and void, thus obliging each party to return the benefits received to the other.

By contracting under the table, with the obvious aim of evading the payment of taxes, the contract is vitiated by absolute nullity. In this context, several judges have dismissed the plaintiffs' action against the contractors for that reason.

In a much-cited decision, the Honourable Richard Landry, Court of Quebec Judge, also stated that "[t]he nullity of a contract 'under the table' has already led many colleagues to dismiss any action brought by a contractor or client on the grounds that the work was carried out outside the law.  One cannot both act illegally and then seek the assistance of the courts when the matter goes wrong.” In recent years, however, several judges have nuanced the impact of the nullity of a contract between a consumer and a contractor in order to allow for a debate on the contractor's liability.

In short, a syndicate wishing to carry out work on a co-ownership should always retain the services of a qualified contractor, and this, according to the rules of the trade, that is, with a proper invoice, in order to protect its recourses against it and to respect its legal and contractual obligations towards the community of co-owners.

If you have any questions, we invite you to contact our construction and co-ownership law team.

Contractor Under the table work Work