36354 Members
Ask your question without charge 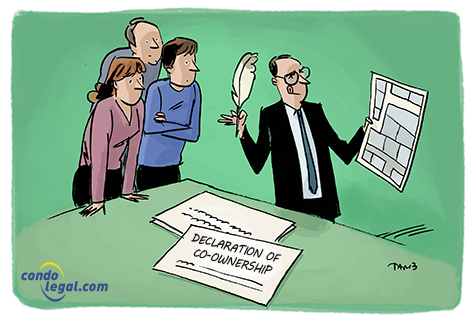 When it comes time to acquire a home, many buyers turn to the acquisition of a multi-unit building (such as a duplex, triplex, quadruplex, etc.). The direct conversion of rental units to divided co-ownership is prohibited in some cities, with a few exceptions, which is why owners first turn them into undivided co-ownership. It should be noted that a building, whose dwellings are all occupied by undivided owners,can be converted into divided co-ownership, subject to certain conditions. But carrying out this conversion requires to overcome several steps involving all owners concerned.

Obtaining a ruling from the Administrative Housing Tribunal

As this could result in lengthy delays, it is advisable to initiate the application as soon as possible. It is also recommended at this early stage of the process to retain the services of a lawyer. The latter will handle the many inherent proceedings. He will also represent you before the Administrative Housing Tribunal.

Alongside the proceedings initiated before the Administrative Housing Tribunal, one should retain the services of a land surveyor and a notary to set up the divided co-ownership. The former prepares the cadastral plan, before the publication of the declaration of co-ownership and the latter will draft the said declaration and oversee its publication.

The notary chosen must master the concept inherent to converting an immovable into divided co-ownership, because he will more particularly have to provide specific clauses in the declaration of co-ownership to adequately complete the division of the immovable between the co-owners. For example, he will need to include certain provisions regarding the partition that ends indivision and others on the reallocation of existing hypothecs. We remind you that the declaration of co-ownership may not be published, as long as the new cadastral plan has not been duly formalized in the Land Register of Quebec. Once those steps completed, the immovable held in divided co-ownership may then benefit from it various advantages.

in the land register within one year following the ruling, will render it ineffective. However, the Board may extend that period for reasonable cause, provided the application is submitted before the expiry of that period.

The limitations to a conversion

The transformation of an immovable into divided co-ownership is prohibited if it:

Montreal and its peculiarities

If the conversion project takes place in the agglomeration of Montreal and all the dwellings are not occupied by undivided owners (eg. A dwelling is occupied by a tenant or is vacant), one must also contact the office of the borough concerned, in order to obtain an exemption to the ban on conversions.

The applicable property taxes also represent an important variable to be taken into consideration from the outset, to avoid surprises. Several Montreal boroughs impose a tax known as "park tax " for any conversion project, which currently represents 10% of the value of the land on which the immovable to be converted is located. For some undivided co-owners, the tax payable prior to the issuance of a subdivision permit, could hamper the conversion. This permit is issued prior to the modification to the cadastral plan of the immovable into several lots (private and common portions).

WHAT YOU SHOULD KNOW ! Following the co-ownership conversion process, the municipality will assess the apartments (private portions), to issue and send a separate tax bill to each divided co-owners.

WHAT TO KEEP IN MIND : The conversion process is complex, it is better to retain the services of qualified professionals, to avoid problems with the conversion down the road. Moreover, the legal documents (e.g. cadastral plan and co-ownership declaration) must be signed by all co-owners.

WARNING ! The insurer of the immovable shall be notified of the conversion process, as you must know that before publishing the declaration of co-ownership, the current insurance coverage will have to be modified accordingly.