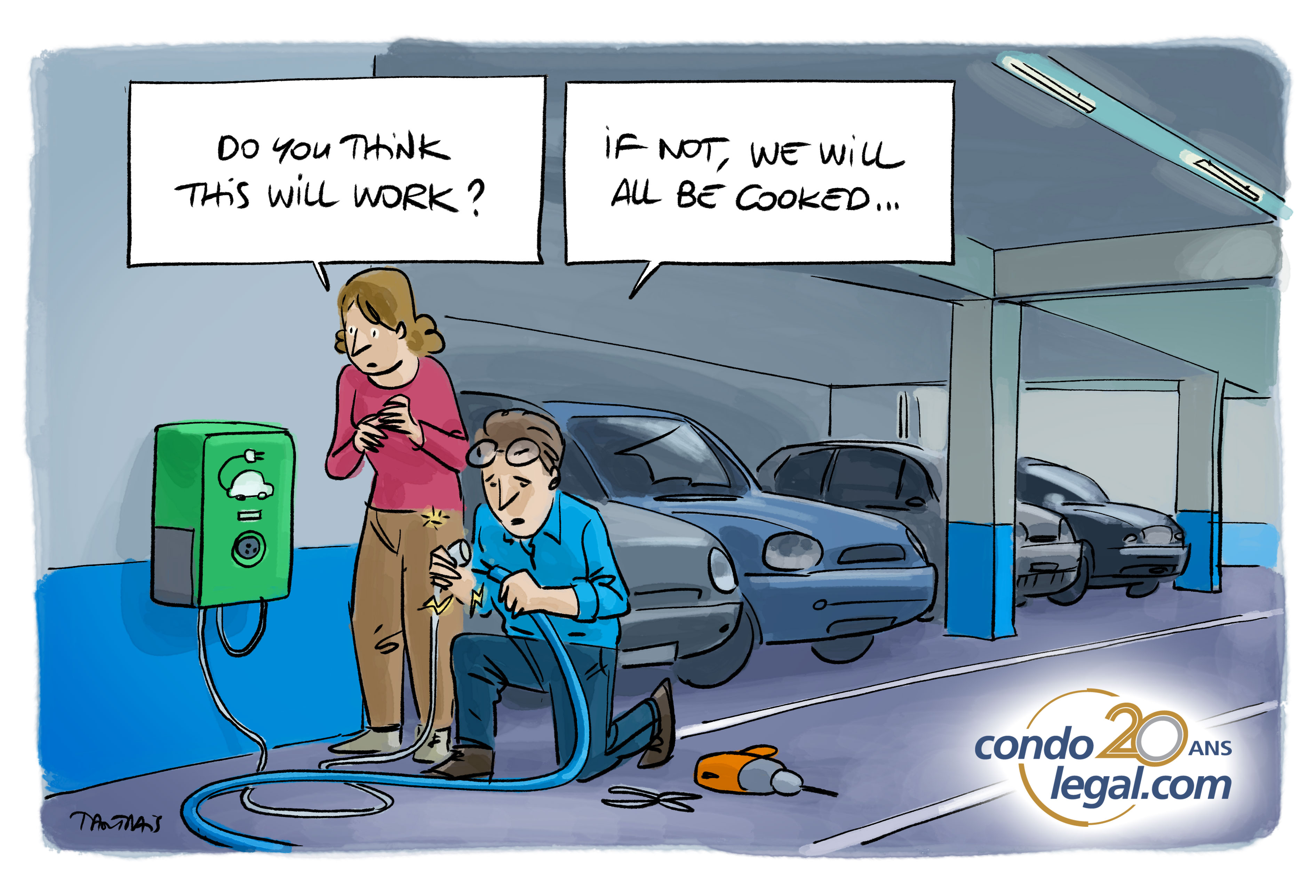 Electric vehicles (EV) are increasingly seen as one of the ways to reduce the impact of car traffic on the climate. With the effort to be made to substantially reduce Quebec's greenhouse gas emissions and to contain the increase in temperatures by the end of the century, the sale of EV has become a must. In Quebec, in 2030, the number of EV is expected to increase to 1.5 million, or 30% of the Quebec car fleet. In 2035, the sale of new gasoline cars will be banned in Quebec and Canada. Paradoxically, the majority of buildings held in divided co-ownership are not equipped to allow EV charging. In addition, the declarations of co-ownership of these buildings have not provided for anything on this issue.

Installing a charging station in a co-ownership: a challenge

The installation of charging stations in building parking lots is sometimes contested by co-owners who do not intend to acquire electric vehicles and do not wish to contribute to the cost of the work. Some co-owners find it difficult to convince their syndicate to be accommodating on this issue, while others have found common ground. However, this subject is nevertheless an essential one, because inevitably the electrification of transport is part of the state's desire to curb the damage caused by climate change.

Work to install an electrical system and electric charging stations is initiated by the syndicate of co-owners, when these affect the common portions. In determining which decision-making body has the authority to decide on such work, account must be taken of the location of the charging stations, the spinning supplying it and the legal status of the parking spaces. When it is necessary to drill a concrete slab or walls that are qualified as common portions at the end of the declaration of co-ownership, this work must be approved by the meeting of co-owners. However, it should be noted that this decision-making body could adopt a resolution that would delegate to the board of directors the power to authorize the installation of charging stations at the rate of individual requests from co-owners.

This may differ within one co-ownership to another, depending on what the declaration of co-ownership (constituting act of the co-ownership) says. A distinction must be made between the boxes designated as private portions and the others, which may be qualified as common portions or common portion for restricted use. Each of them has its own characteristics.

Most declarations of co-ownership grant outdoor parking spaces a legal status of common portions for restricted use. As for indoor parking spaces, they may also be designated as such, when the developer (declarant) does not consider it useful to create a lot number specific to each of these spaces. These are therefore an integral part of the lot constituting the common portions of the building.

The installation of charging stations therefore affects the common portions of the building. Therefore, they must be classified as works of alteration or improvement of the common portions. This work must therefore be the subject of a formal authorization from the meeting of co-owners, by an enhanced majority (article 1097 of the Civil Code of Quebec).

In the case of a horizontal co-ownership with a parking space located in the unit (e.g., townhouses), the power supply to the charging station is often connected to the co-owner's electricity meter, making the installation similar to that performed for a detached house.

If the entire electrical system is located in a private portion and connected to a private electrical system, the co-owner will not have to obtain the authorization of the meeting of co-owners. However, it is common for the by-laws of the immovable (declaration of co-ownership) to include an obligation to subject such work prior to authorization from the board of directors. The manager or directors will thus be able to carry out the essential checks, so that ultimately the work is done by competent persons and does not entail risks to the integrity of the building and the safety of the occupants.

In the case of a vertical co-ownership whose parking space is located in a private portion, the reasoning described above cannot apply without reservation. It will generally be necessary to carry out work in the common portions (e.g. drilling a wall or concrete slab to allow the installation of the electrical wire to serve the charging station). Therefore, these works will have to be the subject of an authorization of the meeting of the co-owners, with the enhanced majority.

Most declarations of co-ownership have nothing to do with regard to charging stations. However, thes syndicates that want to go green can partially modify their declaration of co-ownership (constituting act of the co-ownership and by-laws of the immovable), by inserting clauses that will be part of a "charging policy".

In the particular situation of a co-ownership, several options exist regarding the sharing of installation and electricity consumption costs. Generally, the co-owners will want each owner to assume all the costs of installation, repair, maintenance, consumption, operation and replacement of all the components of the new electrical installations that serve his parking space. It is therefore specified in the amendment to the declaration of co-ownership that all these costs are particular common expenses borne entirely by the co-owner concerned.

Subsidies
Various financial aids are offered for the acquisition, rental and installation of one or more charging stations for multi-unit buildings. This assistance is offered by various levels of governments  (Government of Quebec via the Roulez Vert program and certain municipalities). Note, however, that these subsidy programs contain strict conditions (for example, the Roulez Vert program categorizes installations  between domestic use versus installation in a multiple dwelling (five or more units)).

WHAT YOU SHOULD KNOW! ​The conversion to electric vehicles (EV) is underway in Quebec, although it is slow, especially in the field of co-ownerships. The installation of charging stations is increasingly perceived by co-owners as an opportunity to maintain or increase the market value of their property. The syndicates of co-owners thus have an interest in setting up a plan for the installation of charging stations.

WHAT TO KEEP IN MIND: ​A syndicate of co-owners would do well to have its declaration of co-ownership rewritten, especially if it is of a certain age. In doing so, it will be able to include provisions relating to electric vehicles, and specify who pays what with regard to the installation of infrastructure, maintenance and repairs.

WARNING! The installation of a charging station in an indoor or outdoor parking lot of a co-ownership requires the execution of work by an electrical contractor holding a license from the Régie du bâtiment du Québec. In addition, this installation is subject to the same rules as those of any other electrical device. The charging station must be certified according to the Quebec Construction Code and bear one of the marks recognized for this purpose. 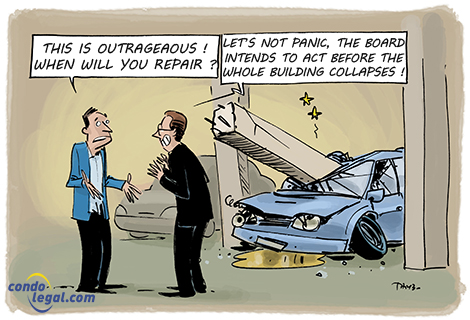