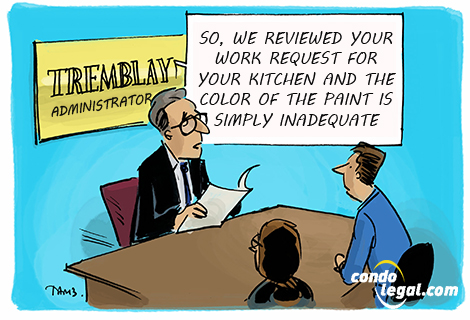 Many co-owners mistakenly believe they have carte blanche, when they want to change their kitchen space, renovate the electrical installation or plumbing or knock down a wall. However, the by-law of the immovable (declaration of co-ownership) generally include strict rules, limitations and even prohibitions concerning work that can be undertaken in a private portion. This explains why, in many cases, the co-owners require prior authorization from the board of directors. This decision-making body has the power to approve several types of work that co-owners would like to do in their apartment.

Why is the approval by the board of directors justified?

When work is planned in a private portion, there are several reasons for the prior authorization by the board of directors. It allows the latter to carry out the essential verifications, so that ultimately, the work will be in accordance with the declaration of co-ownership. The board of directors may also ask for the authorization of the co-owners, at a general meeting, if the work affects the common portions, as in such cases it needs to be authorized by this other decision-making body.

These verifications will also ensure that the mandated contractor holds a licence issued by the Régie du bâtiment du Québec (Québec Building Board), as well as liability insurance. The directors may also need to give notice to the residents of the immovabble if the proposed work cause temporary inconvenience to them.

Why a prior authorization?

It is one of the management tools available to the board of directors to ensure the quality control of the work undertaken in the immovable. They must also abide to the co-ownership rules. These guidelines relate to compliance with the declaration of co-ownership, development and construction standards in force, as well as the rights of other co-owners. In addition, they concern insuring that damage will not be caused to the common portions of the immovable, and that the appropriate decision-making process has been initiated by the general meeting of co-owners, if necessary. It should be noted that an authorization given by this meeting could be mandatory, if the proposed work affects the common portions. If this is the case, all the terms and conditions imposed by this general meeting must be respected for the work to take place.

Nature of the work and materials used

The co-owner wishing to have work carried out that has or could have an impact on the common portions must, generally, submit to the board of directors the plans and specifications prepared by a building professional. Especially if they affect their mechanical components (plumbing, electricity and ventilation).

These plans will specify the nature of the work to be carried out and the materials to be used. After approval, the board of directors will file them in the register of co-ownership. Under article 1070 of the Civil Code of Québec, this register must contain the plans and specifications of the immovable, as well as the modifications that have been made to them.

The installation of hard flooring is one of the most common co-ownership renovations. However, it happens that such replacements causes damage to the other co-owners of the immovable, due to an installation that does not meet the standards in force. Acoustic membranes are often involved because they may be inadequate, poorly installed or even absent.

Therefore, the replacement of hard flooring (in a private portion) must be taken seriously by the directors. The co-owner concerned will have to prove that the new materials installed will offer an acoustic performance equivalent or superior to that of the original flooring. This will require the written opinion of a recognized expert (at the co-owner's expense), who will confirm, in his report, that the new flooring complies with current acoustic standards. This report will be credible only if the mandated expert carries out the required tests. Once the terms and conditions for the installation of the flooring have been satisfied, the board of directors will take not of the conformity of the project.

After the fact ratification by the board of directors

While prior authorization to start the work must (in principle) be given, the board of directors nevertheless has the power to ratify it after the fact, even if it has been started without permission. This can be done by means of a regularisation after the fact, under reserve of the parameters established by the declaration of co-ownership. That said, it is not recommended to start work without prior authorization under pain of being fined under a penal clause - which may be inserted in the declaration of co-ownership - or even to be required to restore the premises to their original state.

Limits to the power of control

WHAT YOU SHOULD KNOW !  The filing of the various applications for authorization to undertake work, as well as the related plans and specifications,are very useful to the syndicate as the latter must take out insurance on the immovable for its reconstruction cost, including the private portions excluding improvements carried out by a co-owner to his private portion. The acting directors will thus be able to identify the inclusions and exclusions specific to the insurance contract subscribed by the syndicate.

WHAT TO KEEP IN MIND : Under article 1039 of the Civil Code of Québec, the syndicate’s main mission is the preservation of the immovable and the maintenance of the common portions. Consequently, it has, in most cases, the right to inspect the work carried out in the co-ownership.

WARNING ! The prior authorization to undertake work in his private portion does not exempt the co-owner, however, from his obligation to obtain the necessary authorizations and permits from the municipality. 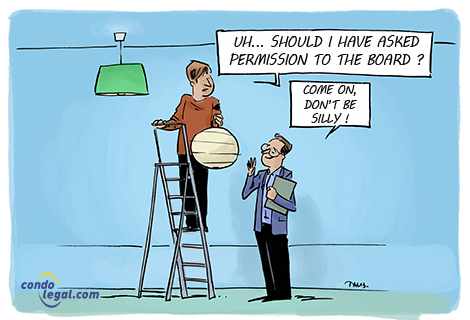