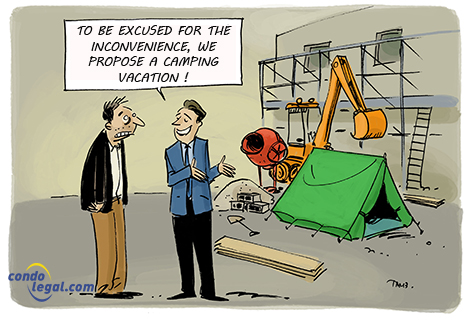 In principle, the work undertaken by the syndicate should not cause harm to a co-owner. If he suffers a prejudice beyond a mere temporary nuisance, he is then be entitled to an indemnity. Article 1067 of the Civil Code of Quebec states that a co-owner may be indemnified by the syndicate, if the work was carried out at the request of the latter. This article lists the grounds for indemnification, namely the permanent diminution in the value of his fraction, a grave disturbance to enjoyment, even if temporary, or through deterioration to the private portion.

Permanent diminution in the value of the fraction

The definitive decrease in the value of a fraction may result from a permanent and irreparable disorder, following the work, and which, consequently, alters or even eliminates the specific qualities of a private portion (Examples: reduction of the area of a parking , decrease in the soundproofing of an apartment, reduction of the illumination and sunshine of an apartment following the construction of a building for common use.). Property damage caused by work in a private portion gives rise to an indemnity if it is not possible to restore the affected area to its original condition. In conclusion, if the work results in the impossibility for a co-owner to normally enjoy his private portion, compensation is then due to him.

Article 1067 of the Civil Code of Quebec specifies that it must be a serious disturbance of enjoyment. This disorder must, in principle, be revealed in the private portions, because the impairment of the enjoyment of the common portions, an obligatory consequence of the work, constitutes a collective and not individual prejudice, which the co-owners must bear in return for the expected benefits of the improvements undertaken. It would be different if the disturbances concerned common portions for restricted use, such as balconies or terraces, the enjoyment of which had been attributed to one or a few co-owners. Therefore, the damage would then be of a personal nature.

Co-owner’s indemnification is only possible if he suffers significant harm, which goes beyond a temporary annoyance. It must exceed the extent of the inconvenience that each one normally has to bear, because of the execution of work in the co-ownership, for example the impossibility to live in his unit or to use his terrace during roof repairs.

Therefore, insignificant disorders are excluded, as well as normal and unavoidable limited annoyances caused by the work. If the damage is limited, and the work does not require a co-owner to leave his apartment or to refrain from carrying on his activities, the syndicate may be justified not to offer compensation.

The law specifies that if a co-owner suffers injury, due to the significant deterioration of his unit and of its accessories, he is entitled to claim an indemnity for the damage suffered, such as in the event of:

It is up to the co-owner to evaluate the damage he has suffered. If the disturbance of enjoyment is only temporary, he will be entitled to a compensatory indemnity.  However, if the damage is permanent, the syndicate may, in certain circumstances, have certain work carried out in a unit to remedy the damage suffered. This could be the case with soundproofing work on an apartment to protect it from noise pollution attributable to the operation of a new elevator. Therefore, the compensation must correspond to the cost of this work. However, if it is impossible to remedy the disturbances of enjoyment, the co-owner is entitled to claim compensation covering him for the damage he suffers. It is sometime helpful to retain the services of a knowledgeable expert. The latter can appraise, for example, the cost of restoring the area affected by the work or the loss of the market value of the private portion. If the co-owner cannot come to an amicable agreement with his syndicate, he may take legal proceeding to obtain an indemnity.

WHAT YOU SHOULD KNOW !  The right to an indemnity is provided by law and is of public order. If the declaration of co-ownership states that the co-owner must suffer the access to his private portion without an indemnity, this provision is deemed null and void and may not be applied by the court.

WHAT TO KEEP IN MIND : The indemnity to be paid to a co-owner (by a syndicate) is allocated between all co-owners in proportion to the relative value of their fraction.

WARNING ! The indemnification principle has limitations. If the amount claimed is the subject of a dispute, it will be for the courts to assess the gravity of the disturbance. A co-owner cannot take Justice in his own hands by refusing to pay his common expenses, to compensate the damages he claims to have suffered.

Back to the mega-fact sheet: The work of the syndicate in a privative portion

Common portions for restricted use Work in the private portions