Retrieving the register of co-ownership 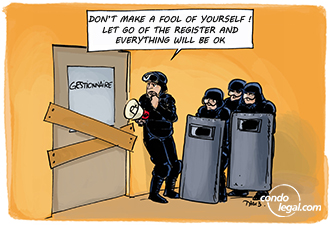 Transmission of the register

In the event of the termination of his duties, a director or manager may not, in principle, retain the documents in his possession. It must be remembered that he does not own them, but is rather a depositary. The Board of Directors therefore has a legitimate interest in retrieving the register without delay, since the documents it contains are indispensable for the day-to-day management of the co-ownership.

How to recover the register?

The first step in retrieving the registry is to request that it be returned to the syndicate. This will be done by means of a notice in writing which will have the objective of:

If this first notice is not respected, a formal demand letter will need to be sent requiring the remittal of the documents, under certain conditions and under a specific timetable, otherwise legal proceedings will be instituted. If push comes to shove, then the syndicate must resort to the courts to obtain an order (injunction) enjoining the ex-manager, former director or other third party to return the register in accordance with pre-determined conditions, such as the time and place chosen for the delivery to take place. Also, if the syndicate considers that the person who retained its property was not entitled to do so, it may also claim damages against the latter.

Right of retention: a right of exception

In the normal course of its activity, the condo manager as well as the co-ownership manager (gérant) is called upon to safeguard the archives of the co-ownership. If the syndicate that hired him does not pay their fees, the question arises as to whether they can refuse to return these records, as long as are not paid.

In a 2003 decision, the Quebec Court of Appeal  recognized a right of retention for the administrator of the property of others”, such as the co-ownership manager (gérant). This right is also inscribed at article 1369 of the Civil Code of Quebec.

However, in order to exercise this right, its holder has to fulfill certain conditions, such as holding an exigible claim related to the asset retained. Such would not be the case, for example, of a co-ownership manager claiming compensation from the board of directors for managing an insurance claim when such work was not included in his contract.

Another condition for this right of retention to be exercised is that its beneficiary must not be in default of fulfilling its own obligations. In other words, if the syndicate has terminated the contract of the co-ownership manager, because of a failure in the performance of his contractual obligations, the manager will not be entitled to retain the register of co-ownership in order to obtain the payment for services that he has not rendered. It will obviously be necessary for the syndicate to demonstrate that the manager has failed in one or more of its duties.

The special case of the professional manager

When a manager is a member of a professional order, such as the Quebec Order of Chartered Administrators, the rules of professional conduct (article 42 of the Code of ethics of chartered administrators) require him to act diligently on the request of a client who wants to retrieve his documents. It will be so, even if fees have not been paid.

WHAT YOU SHOULD KNOW ! Syndicates of co-owners are legal persons required to be represented by a lawyer before the courts. The preparation of a proceeding for the issuance of an injunction is a complex matter. Therefore, it should be entrusted to an experienced lawyer.

WHAT TO KEEP IN MIND: The co-ownership manager, whether or not he is a member of a professional order, for example the Ordre des administrateurs agréés du Québec is required to act (with diligence) at the request of a client who wants to recover his retained property. This will be the case, even if a fee has not been paid. According to a judgment of the Court of Quebec (small claims division), issued in April 2021, the right of retention under the second paragraph of section 1369 of the Civil Code of Quebec is not part of the rights of an administrator (manager) responsible for the simple administration of the property of others.

WARNING! A Board of Directors shall, for the purposes of the administration of the immovable, safeguard all the documents and archives necessary to  carry out its duties . It cannot tolerate that the register of the co-ownership be taken hostage by anyone. 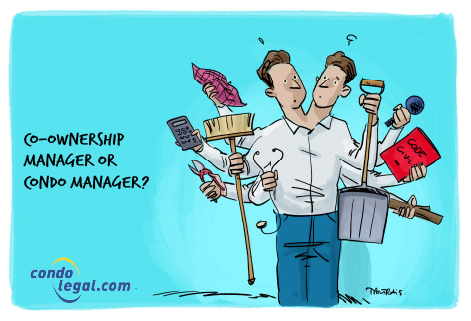