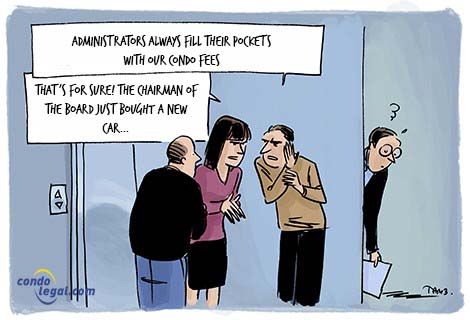 Co-ownership is an environment conducive to conflict and acrimonious exchanges. Some people who are members of a community of co-owners are sometimes victims. This can happen at an annual meeting, when spirits are heating up and frustrations are at their peak. Latent conflicts between a co-owner and a director, deep disagreement about a resolution put to the vote, excesses following an unbearable tension are all examples that illustrate that in such situations, defamatory or insulting remarks can be expressed.

Co-ownership is not always a long quiet river

Life in co-ownership is not always easy. Never mind, we must remain calm in all circumstances, in order to avoid unproductive slippages that could lead to the court. Whether expressed consciously or not, defamatory statements and their consequences vary according to various criteria. Legally speaking at least. It is better to avoid being prosecuted for this reason, because it would result in a toxic climate in the building, not to mention possible sequelae that would poison the lives of the people concerned.

At the time, defamatory remarks made wrongly and through can relieve the author, but in the very short term, they cause damage whose scope is often unsuspected. Before committing the irreparable, co-owners and directors have an interest in thinking about what they could say or broadcast.

Over time, several court decisions related to defamation have been rendered. A decision of the Supreme Court of Canada recalled that defamation results from statements - or writings - that cause someone to lose esteem or consideration or that, in addition, give rise to unfavourable or unpleasant feelings towards them. Defamation includes any negative communication expressed by one person to the detriment of another, the purpose of which is to damage his or her reputation. Moreover, it must be remembered that even if the message conveyed is not false, there may nevertheless be cause for defamation. This happens when its author says or writes unpleasant or unfavorable things about another person, in order to expose him to hatred, quips, humiliation and disgust, to name but a few.

The Charter of Human Rights and Freedoms provides that every individual has the right to the protection of his or her dignity, honour and reputation. An unlawful infringement of a Charter right confers on the victim the right to obtain an end to that infringement and compensation for the resulting damage. In addition, where an infringement is unlawful and intentional, the court may order the perpetrator to pay punitive damages under section 49 of the Charter of Human Rights and Freedoms. This type of damage has a dual purpose: punishment and deterrence.

The Civil Code of Quebec also provides that every person is the holder of personality rights, such as the right to life, the right to the inviolability and integrity of his person, as well as respect for his name, reputation and private life. In addition, it is required to exercise its rights according to the requirements of good faith. No right may be exercised with the intent of injuring another or in an excessive and unreasonable manner, and therefore contrary to the requirements of good faith

In the event of a contravention of these Laws, the right to compensation for damage falls within the framework of the civil liability regime, provided for in article 1457 of the Civil Code of Quebec. This provision provides for compliance with the rules of conduct which, depending on the circumstances, are necessary in order not to cause harm to others. The analysis of the defamatory nature of the statements or writings complained of must be objective. It is necessary to put the fault in its context in order to better appreciate it, according to specific circumstances and facts.

Statements deemed defamatory will therefore not necessarily engage the civil liability of its perpetrator, because the victim must establish the existence of prejudice, fault and a causal connection. The defamed person will also have to prove that the latter is at fault, because of a malevolence or negligence that he would have committed. In short, for there to be recognition of a fault, its perpetrator must have knowingly intended to damage a person's reputation, ridiculing and humiliating him, therefore arousing hatred and contempt. Whether within a community of co-owners or in other environments. Even defamation without a manifest will to harm could be punished, when a gossint person damages the reputation of the defamed by his recklessness, negligence and impertinence.

Exception to the rule

Comments made in a private context do not constitute damage to an individual's reputation. To be recognized as such, they must be shared publicly. For example, to tell one's best friend, without anyone else as a witness, that the chairman of the board of directors is a hypocrite is not necessarily defamatory in nature. However, to make these same remarks in a discussion forum between co-owners, on the Intranet of the co-ownership or social networks could be considered defamatory.

The three scenarios outlined below illustrate as many examples of what defamation is:

WHAT YOU SHOULD KNOW ! To avoid any risk of defamation, the written word or the statement made must be accurate, and must have been transmitted to those who have the right for valid reasons. It should be noted that defamation actions cannot be brought in the Court of Québec - Small Claims Division, even if the damages claimed do not exceed the threshold ($15,000) allowed.

WHAT TO KEEP IN MIND : For defamation to lead to financial compensation, it must be shown that the comments caused damage to the victim. As for the action for defamation as such, it must be initiated within the year in which it occurred, from the day on which the potentially defamed person became aware of it.

WARNING ! ​The syndicate of co-owners cannot be sued for defamation for remarks made by a director. Rather, the action must be taken against the latter personally.